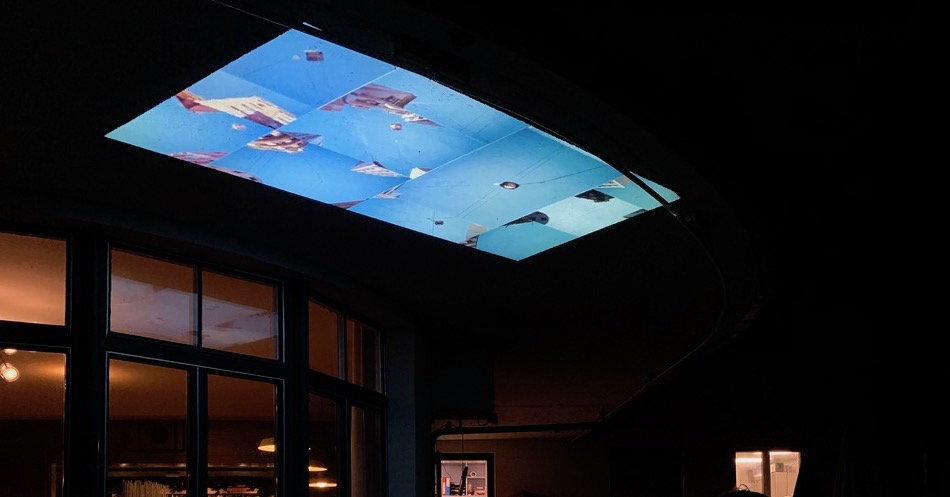 Below only in English

stadtprojektionen IV invites you to a nighttime stroll and watch above the city of St. Gallen. Drei Weiher nature park, a bathing and local recreation area will be the venue for the projections. Photo and film works will be shown at the idyllic bathing pavilions of Mannen- und Chrüzweier (ponds), on wooden footbridges and underneath the roof of restaurant Dreilinden.

The prelude to the fourth edition takes place on August 27 at Frauenbad Stadthausquai in Zurich: Those arriving or departing can see a corporeal film work by BIGLERWEIBEL on the outer facade. At the edge of the recessed pool, just above the water surface, a text projection by Michèle Graf and Selina Grüter takes place. And in a changing room, animated figures by Bertold Stallmach can be observed – smooching, bathing, and encountering a sea monster.

The wooden bathhouses on the River Limmat and at Drei Weieren were built at around the same time. In terms of incorporation into the urban context and modern atmosphere, these bathing facilities present themselves very differently in the two cities: Drei Weieren is an intimate bathing facility surrounded by nature, while Frauenbad Stadthausquai is part of a vibrant city.

More about my work densen in the exhibition:

The film collage Densen by Anna Linder is based on photographs from Tokyo, St. Petersburg, Barcelona, Milan and Buenos Aires. The artist animated them manually in a complex procedure to a film: Sometimes the focus is on one photograph, sometimes the view is vague or the images swirl in a circle, then another zoom-out shows an organised collection of photographs. What Linder’s photographs have in common is a skyward gaze. Cropped skyscrapers, traffic lights and pylons can be made out, their wires diagonally cutting across the photographs again and again.

Densen (a Japanese word, meaning power line) is projected beneath the overhanging roof of the restaurant Dreilinden. The direction of the viewers’ gaze matches that of the film collage. The restaurant Dreilinden was built in 1932. Its flat roof, cubic main body and semicircular annex make it an important representative of the New Objectivity style in St. Gallen. The Densen projection at Drei Weieren also makes reference to the moment when someone emerges from water, head outstretched, still perceiving the surroundings as a blur and trying to direct their gaze again.

Since the early 1990s, Anna Linder has been working with the moving image, be it as an artist, curator or producer. Active in the LGBTQ community, Linder produced the experimental film Spermwhore in 2016, in which she addresses the unwanted childlessness of homosexual couples. In the same year, Linder launched SAQMI, the Swedish Archive for Queer Moving Images, located in Gothenburg.