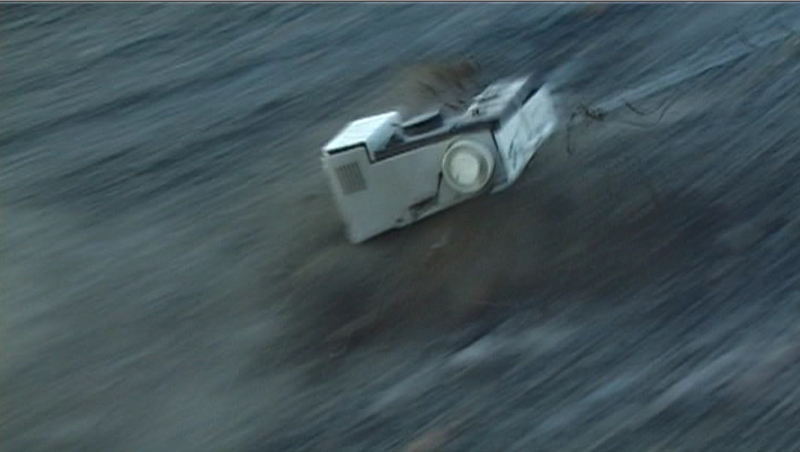 Video, 2008, 3 min, stereo, colour, 16:9, PAL
Sister Drag is a part of an ongoing work about the invisible labour of women; “I can’t hear the sound of your sewing machine anymore” is a tribute to my mother, grandmother and to all the women who suffer from a constant bad conscience for not being good enough.

”A feminist remake of Christian Marclays Guitar Drag. One Sewing Machine called Brother is dragged behind a Volvo up in the mountains of Lapland in a light summernight” (From the text for the exhibition SISTER at Borås konstmuseum).

Thank you Christian Marclay for Guitar Drag that inspired me to make a feminist version. Åsa Sandzén for the editing. Klas Strandberg for providing the microphones and Jan Alvermark for the sound. Thanks also to all of you who helped me up in the mountain Blaikfjället during the shooting; Ann-Irene Linder, Christina Linder, Johannes Fransson, Oskar Fransson, Gunnar Sundin and Victor Waldemarsson.

Related work in this project:

13 Related Sewing Machines
Film, 2011, 6 min, HDCAM-SR, DVD, 16:9, Colour, Stereo, PAL
Why can´t I hear the sound of sewing machines anymore? A meeting with my family and the history of all their sewing machines.

I’m making this sparetime useful by not making waste
Performance, 2010, 2-8 hours, 4-8 channels
The performance is a way to use time for important work. I am repairing, taking care of my textiles and my clothes. I don´t want to buy new things anymore. I hate H&M and all cheap things that destroy our culture and the planet. It is also a way to show some concentrated work and let people be in silence together with the sounds from the sewing machine.

SISTER
2005, Key-rings
A work for all sisters in the world. The key rings were created in connection with the opening for the film The Year of Sisterhood by Åsa Elzén and Sonia Hedstrand. The first two key-rings were given to the artists as a gift. Since then, they have been spread through various networks and sisters but also sold in stores such as Hallongrottan, Konst-ig and others.

SISTER
2014, Medals
Was made directly for the exhibition SISTER at Borås konstmuseum 2014. Here every Sister could participate and write their name at the tablet.