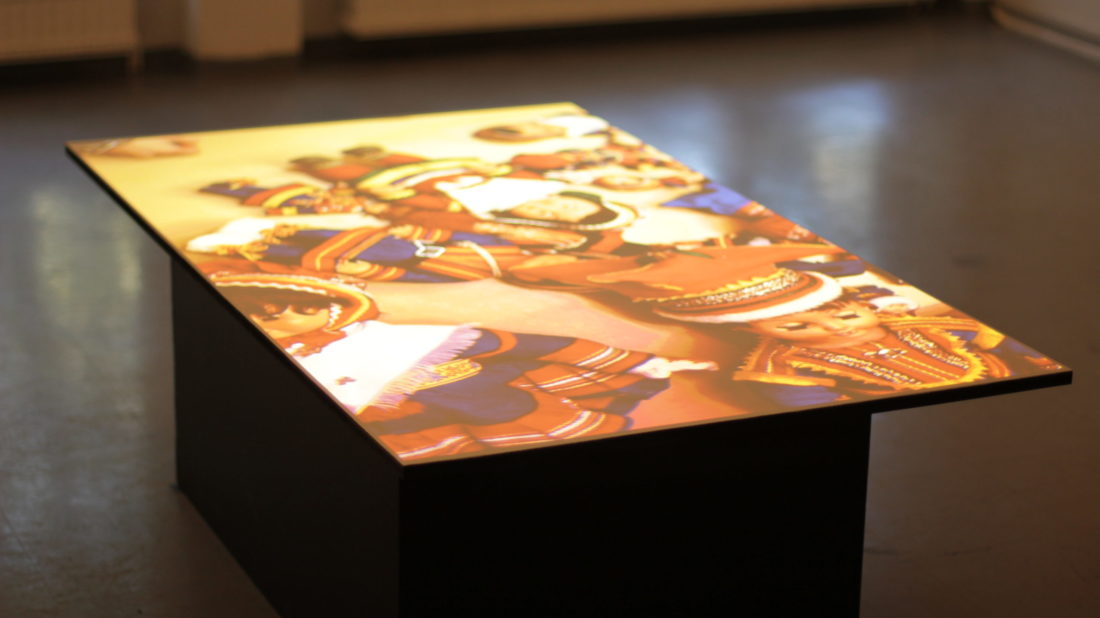 Anna Linder, born 1967 in Lapland, Sweden. She has worked in moving image art as an independent artist, curator and producer since early 1990s. Now based in Gothenburg, Sweden. Her work has been selected for festivals and art exhibitions internationally.

I samernas rike is an ongoing work by Anna Linder where collections of Sami objects play a central role. The Sami dolls that are part of the collection carry many stories, it turns out when the invitees start discussing the costumes and the lack of the South Sami costume. In the video installation Carola Grahn, Anette Kuoljok Spanne, May-Britt Öhman and Ellen Simma Fjellgren talk about the Sami costumes and their importance to them. The conversation moves between and around topics such as tourism, exposure, manufacturing, memories and why the Northern Sami costume always seems to represent the Sami people.

During the presentation at Röda Sten konsthall, the work on the I samernas rike will be shown in its entirety and touch on topics such as belonging and exclusion.

More information about I samernas rike:

This installation of items collected by Anna Linder interrogates, subverts and problematizes representations of Sami identity. The amassed dolls and postcards produced for and consumed (often un-knowingly) by the tourist industry, unnervingly puts forward questions about authenticity, nostalgia and marginalization. Paired with a video showing a humorous critique of the collection by members of the Sami community, the items intertwine complex layers of memory, and history as well as initiate reflections on contemporary Sami identities and the commodification of difference.

Anna Linder explores the complexities and challenges associated with gaining agency over continued presentations of an exoticized minority culture. In this second component of an ongoing project of the same name, she raises questions of authorship of the materials she shows. This process takes place through showing the collected items that represent, or are claiming to represent, Sami culture. Linder investigates and subverts them through her acts of collecting and displaying them en masse: a cacophony of myth-making, nostalgia, romanticization and discrimination. This exhibition follows her desire to explore her own background, while investigating complex layers the external representations of Sami culture. The first edition of the project is also shown within this exhibition and reveals the literal double-sidedness of poetic representations of the Sami as opposed to ethnographic or analytical examinations. This duality presented in I Samernas Rike001 is seen in its form and design: one side being a collectible edition of dream-like miniature postcards paired with a strident account of systemic devalorization printed on the back.

The first part of the art project I samernas rike is a postcard package with fourteen speaking pictures and texts about the Swedes’ view of the Sami. The original postcards represented in the package show a prejudiced view of the Sami life. The texts are taken from books, writings and exhibitions.
You can buy it here

The items included in I Samernas Rike 002 are both compelling and unnerving. They range from original postcards from the mid 20th century to diversely sized and styled dolls for the tourist trade, all in ‘Sami Korts’. Designed to attract the eye, their vibrant colours and compositions ensure that they draw in the audience. The objects of the exhibition consist mainly of souvenirs, which have been created for decades for foreign tourists who are attracted to the objects by the exotic and northern elements these dolls and postcards symbolize. The authenticity of the representations of Sami culture, which these items implicitly claim to show, is unaddressed or assumed. The items perform and replicate the myths of idyllic scenes of Sami families living ‘primitively’; herding reindeer and being an un-threatening ‘lower’ culture represented by childlike dolls in brightly coloured dress. Moreover, these scenes are depicted via a medium that distances the viewer yet again from any contemporary context to which they pertain: the scenes being printed as vintage, collectors’ items.

The problematic dimensions of the objects arise from the questions of who is in control of the representations of a culture after colonization. Who benefits from these representations? The eerie experience of seeing the postcards and dolls points also to the more general problem of the fetishization and commodification of difference.

In discussions with members of the Sami community, as seen in a video work shown, the artist discovered that the Korts worn by the dolls in Linder’s collection are, with few exceptions, fictional. The clothing has no bearing on specific Korts worn by the Sami peoples. While the faux garments seem to emulate North Sami Korts with little attention to accuracy, what results is the creation of a further fiction: that Korts, and even the Sami population, is homogenous. The participants in the film express their disappointment at this lack of disctinction, specifically at the lack of South Sapmi Korts, and convey their desire to be accurately represented. These sentiments shows the impact and problematize the fictionalizing of contemporary and marginalized identities.
Public discussions will take place during the exhibition period which will engage members of the audience as well as professionals working around issues of representation of Sami culture and identity. These talks will address thematic issues raised in this exhibition and provide opportunities for further discussion. Text: Lara Szabo Greisman